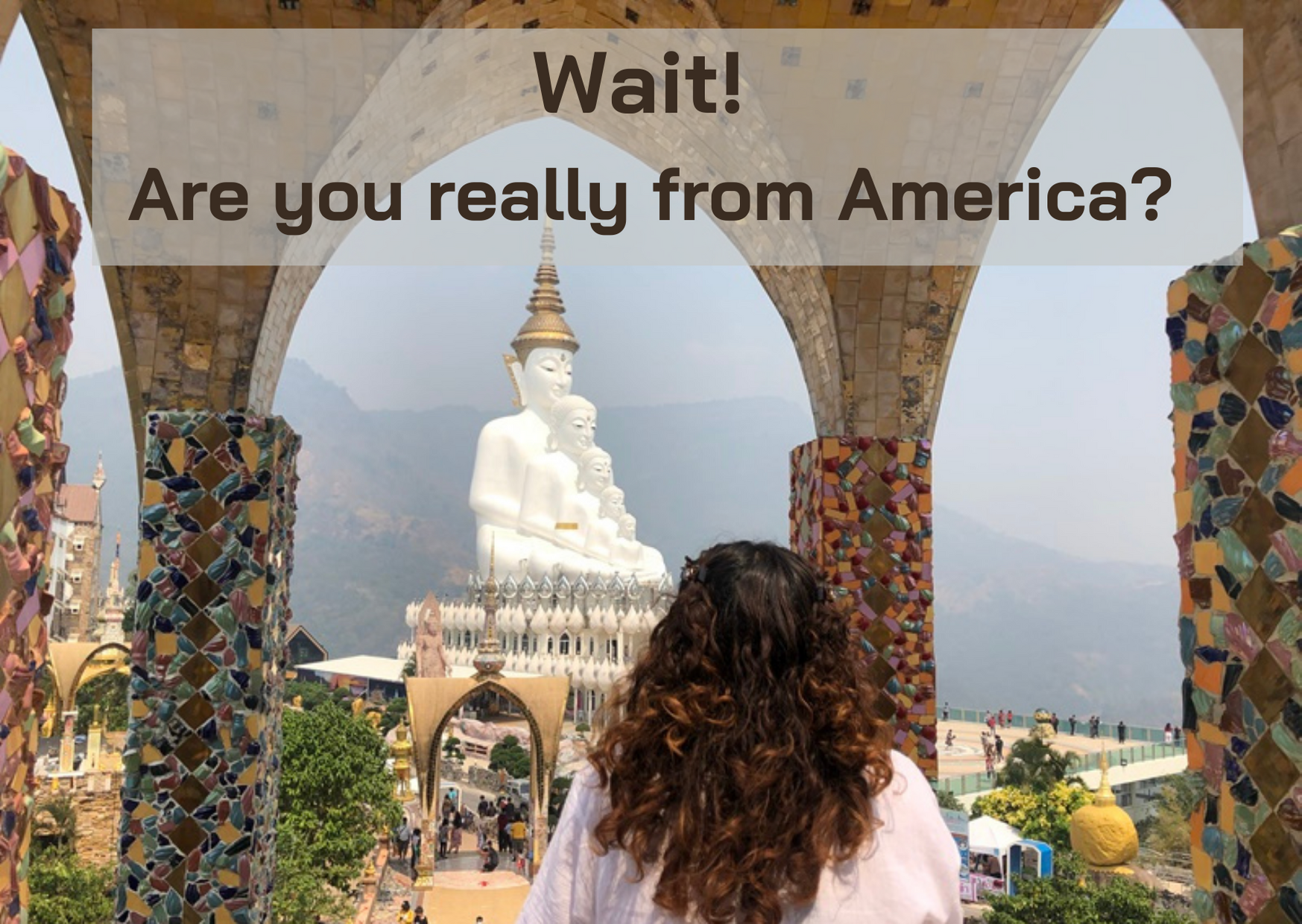 ‍My name is Doris Gonzalez and I am a 2020-2021 Fulbright English Teaching Assistant at Watbot School in Phitsanulok province where I teach Prathom 4,5, and 6 (4th, 5th, and 6th grade). I was born and raised in Fortuna, California and later moved to Providence, Rhode Island to attend Brown University. Upon graduating from Brown University with a B.S. in Neuroscience, I worked at the Bradley Research Center studying socio-biological contributors of mental health disorders in children before starting my Fulbright in Thailand. Upon completing my ETA tenure, I will pursue a medical degree. I hope in the future I can incorporate my teaching into being a doctor whether as a mentor or faculty member in a medical school.

I’ve been staring at the menacing eyes of this empty google doc for the past week- which in post-vacation-month-14-day-quarantine feels more like a month. I’ve read previous narratives, all beautifully written and I sit here struggling to find my words. To find my authentic narrative. Day 7 of the menacing eyes have brought me to the striking conclusion I was so nervous to admit- that to tell my narrative as an ETA, I must start at the very beginning, with where I come from. As other American children of immigrants might know, by where I come from, I mean rewind one full generation back to Rancho Alfaro, Oaxaca, Mexico, where my parents are from.

I say my narrative needed to begin with my parent’s generation because without them I would not be here, in this rancho (countryside), admiring the similarities and differences with both my cultures- the one my parents poured into me and the one that I soaked up from my surroundings while growing up in California. I guess what I’m trying to say is that looking at this picture reminds me that maybe I truly was not supposed to be here. Perhaps I was supposed to be in my parent’s Rancho in Mexico, where my education would have not exceeded elementary school as was customary for girls who dropped out early to help their parents keep their farm afloat. Or perhaps I was supposed to be in my hometown Fortuna, CA, working a blue collar job or attending community college; as my high school counselor Ms. Barnum would say, “people who looked like me did.” She reminded me of this before denying her signature to my application for Brown University, where I later attended on a full ride. Or perhaps I was supposed to be on a different career path entirely. At Brown I fought tooth and nail to remain in the slim minority of first-generation women of color who graduated with a bachelors of science in Neuroscience. But I am here. In Thailand. As a Fulbright Teacher! After taking the picture above I stood overwhelmed with gratitude as I absorbed  the magnitude of my presence in Thailand. This was my reality. I had made it.

Where is she from?

This is the question I think Thai people most often wonder whether they voice it with their words or wondering glances. I’ve lived in France and Chile before but never before have I felt so perceived as I do in Thailand. I wondered why for a very long time, asking myself if perhaps it was just my social anxiety acting up. It wasn’t until I sent pictures of myself and my students to my boyfriend Miles that I started understanding the complexity of the gazes I received in Thailand. “Woah, you and your students are kind of the same color” he said. Up until that point I figured the stares came from people wondering what an American was doing in this corner of the world. But when Miles said that, I realized that when people stared at me, they were staring at my brown skin, wondering why it was so similar to theirs. Wondering why my hair was so curly. Weren’t the Americans in the Hollywood movies white? And they usually have blonde hair right? And not curls like that, that’s for sure. Miles’s remark helped me realize that people weren’t just staring because I was American. They were staring because I was American but I did not look like an American they expected. Behind the bewilderment of their perception was forming an understanding that the America they had discovered in Western movies went beyond the white actors they portrayed. That Americans could be short and brown and curly-haired like me. People of color, like me.

Coming to an answer: I am from…

In English, when asked about your identity the phrase “I am...” directly puts you in the position to boil the core of your existence into one sentence. Okay that’s a little dramatic but you get what I mean, all of a sudden you have to decide whether you’ll be from the country you were born OR the country you were raised in OR the country your ancestors were raised in. Thankfully in Thai you can avoid the identity crisis entirely. In Thai expressing your nationality is done with the phrase “maa jaak” (I come from…). It’s up to you to complete the sentence with whatever part of your identity you’d like to share. For some ETA’s, it may be a simple “I come from America,” but if you’re like me, the phrase gives you the perfect invitation to express your authentic self. It took me a couple months to figure this out but now for the most part my introduction goes “I come from America, but my parents are Mexican”- I am a representative of the country I was born in, but I am also the pan dulce (Mexican bread) and piel morena (brown skin) of my mother and father. Saying it this way allows me to be true to myself, and by doing so representing the United States for the mixture of rich cultures, colors, and languages that it is.

What it means to be American

For a long time I was anxious about disappointing my hosts in Thailand. The last ETA was blonde-haired and blue-eyed, would they be sad she’d be replaced by a not-so-American-looking American? I wondered that quite often whenever I was out and about in town, constantly being perceived. At the beginning, being perceived made me shy and even a little anxious, but today it makes me proud. Perhaps I wasn’t supposed to be in Thailand but I am proud that I am because as an ambassador of the United States I get to show Thailand the other side of being an American- the side that’s so often not portrayed in movies but still equally representative of what it means to be American: being a person of color, being a child of immigrants, being low-income, being an Ivy-League graduate who despite life’s shortcomings, is bound for a bright future. Not because it was supposed to happen or because it was easy to happen but because I am American, Mexican American to be exact, and we don’t give up. Ever.